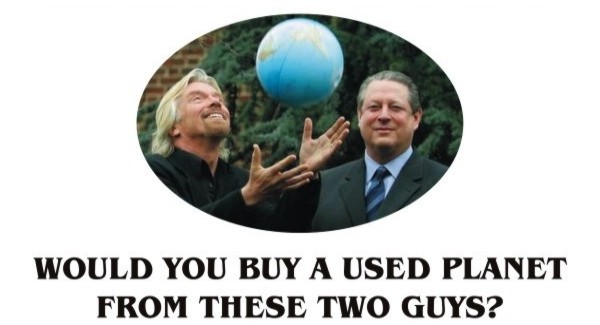 The smirking, Earth Juggling Shysters pictured above, created, marketed, and intend to profit greatly from The Climate Crisis.

Here’s the real skinny...how it all came about...

Sir Richard Branson seeks an inroad to doing business in the USA.

Algore needs something to do.

Branson goes Billionaire EnviroMentalist and announces The Virgin Earth Challenge with Algore as a judge.

From this point ( September ’07 ), through the ensuing months of hype, until right now, we have been inundated by FREE promo for Algore's every whim, establishing his Eco Voice as one of great value in The Future.

Branson, the consummate shill, took a worn out ol' Pol and got him an Oscar, The Nobel, and Future Global Importance.

Sir Richard, capitalizing on his newfound support, has progressed rapidly from lying to House Sub Committees in pursuit of sweet deals, through developing his US presence via Virgin America and at Spaceport America, Upham, NM.

Will Whitehorn, Virgin Galactic Chief, recently announced that his operation will adapt and go into the extremely profitable, and hugely beneficial to Virgin, Telecom Satellite launch business.

When the dust settles, Sir Richard and his Virgin Group Investors will be launching cheap telecommunications satellites.

Which will beam Algore's message around The Globe.

They have us right where they want us.

But, have no fear, Virgin remains concerned about all things Eco/Enviro.

Whitehorn has dealt with the issue, proving Virgin’s deep concern for our extended environment, by stating that..."polluting Space is extremely difficult...the worst we can do is leave behind debris...".

Whitehorn’s statement seems like a challenge...it may be difficult to pollute space...but we can do it...!

I bet these clowns are up to the task.

Big media clout can pollute anything if given the opportunity.

Look what they’ve done with our minds!

I began my online commentary RE The Climate Crisis within minutes of hearing that Algore and Sir Richard had teamed up to Save the Earth.

It was obvious from day one that the Branson/Gore association would lead to one thing...profits for Branson/Gore.

The scope of this so-called Climate Crisis amazes me.

It has definitely hit the guilt/fear nerve dead on.

For better, or worse, these guys opened Pandora's Box.

The Climate Crisis has enabled millions of people to overcome their feelings of helplessness about so many things, providing sudden personal empowerment in the "We Can Save the Earth" racket.

But, with some belt tightening, conservation, and close attention to Algore’s advice, we can alter Earth's Climate, and save only the parts that we like.

"We have the power here. Just do as I say. I've been leading the charge for decades.", quothe Algore...via Branson...

My early awareness of this situation comes from being a competitor with Sir Richard in The New Space Race since the earliest days of the Civilian Space Boom...know your opposition.

Algore came with the territory...what a find!

To follow the story as written...real time comments on the events of any given day during the recent Crisis Development stage...click here...

The realization that our everyday actions alter Earth's Atmosphere isn't anything new.

Global planting of fearful suggestions, predicting dire consequences as a result of said actions...on a massive, media powered scale, is.

Recycled 60s rhetoric, twisted by a bunch of Ivory Tower Cowards into Save the Earth...or else...is pompously spewed from on high.

Right this instant, in The Halls of Power, all over the Globe, powermongers are positioning themselves for what's to come.

These clowns are planning to legislate Earth's Future Climate in the name of Global Economic Stability.

While the confused, cowering masses hope for the best.

The big boys are playing now.

The big time Think Tanks of The Eighties prognosticated and pontificated loudly and clearly about the upcoming Global Economic War.

In the History books, this period of time will be called The Globalization Crisis...unless things escalate to WWIII.

For those of us living through these tumultuous times, it is our lives.

For the first time, Humans everywhere are being to told to consciously adapt on cue, or die.

In the so-called Climate ( ACO2 ) Crisis, no matter which side you are on, believer or denier, the consequences frighten you...even if your side wins.

This is happening because the powermongers have every reason to believe we are dumb as rocks.

We have fallen for their nonsense up until now.

There is zero indication that this trend won't continue.

We can no longer afford to remain as stupidly complacent as we have become.

In the survival game, mental toughness has always proven necessary.

It is the reason we are Earth's current Climax Animal.

Right now we are operating with noggins full of quivering jello...generously swirled with synaptic swill.

THE ART OF COMPROMISE...

is currently being practiced by those deciding Earth's Future Climate.

Remember, these clowns spend every day strutting the Halls of Power, assessing The Climate.

In their minds, Climate Modification...influencing such things as The Climate of the Court, or The Business Climate...is the solution to everything.

Think about how satisfied, or dissatisfied you are with decisions stemming from this process.

Do you want to live in a Global Climate determined by The Art of Compromise?

It's time for a breath of fresh air to blow briskly through The Halls of Power.

Give these Earth Juggling Yahoos a chance to clear their heads before we all pay the price...for a really long time.

in the Global Battle for Survival.

Right now, Sapiens is exposing a soft spot for The Natural World.

Technus has ZERO affection for The Natural World.

There is plenty of recorded imagery from the Age of Homo Sapiens.

Technus can review and learn, while wondering how anyone ever lived like that.

Somewhere, in their heart of hearts, Technus realize that Nature is their enemy.

In the not too distant past, those who are evolving into Technus would not have survived.

The recent doubling of Earth's Human Population is greatly attributable to a short winning streak in Mankind's Dominion Over Nature Quest...we have removed countless threats to ourselves in this recent fifty years...at great cost to The Natural World.

Technus will benefit from these removed threats to thrive in the Techno Future...like it or not. 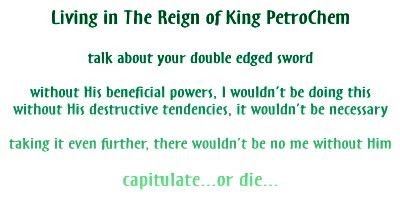 What it says above is true...right down to the 'no me' aspect...more appropriately, the 'no us' aspect.

Without diesel fuel, the ships used by my Irish Ancestors to escape the Potato Famine, never would have existed...end of story.

But, King PetroChem provided the escape...and fueled the expansion.

Earth's Human Population has doubled during the Reign of King PetroChem.

None of this would have happened without the sense of possibility and expansiveness provided by Him.

All things considered, taking a lesson from History, I'd say He has His Subjects right where He wants us...addicted to, and at war over His beneficial powers.

While living in constant fear of His destructive tendencies.

I want to go on the record in favor of Sir Richard and Algore being charged with Crimes Against Humanity in the name of Self-Promotion.

Every death related to The Anthropogenic Hot Air Crisis...whether from extreme stress over all the doubt, eventual starvation due to panicked hording by the wealthy, or actual gunshot murder in the ensuing chaos...is their fault!

Don't you agree that blindsiding the populace with their carefully calculated, Branson generated media blitz of purposeful lies is inexcuseable?

When the Branson/Gore assault first began with The Virgin Earth Challenge, Live Earth, Algore's movie, all the awards, etc., I knew it would catch on because there was an empowering aspect in a time when futility seemed the order of the day.

We can't stop terrorism, comets from Outer Space, or rapidly mutating viral pandemics, but we can still Save the Earth by using Corn Oil to run our cars.

A few trips to the recycle center in our alternatively fueled vehicles, and we are all Earth Saviours.

That's what I call Empowerment Lite.

It didn't take a genius to figger out that lotsa frightened, impressionable Folks would jump aboard the Branson/Gore BandWagon.

The mess we've made is catching up...threatening to overwhelm us...and there's no place else to go.

Heightened Global Awareness of this self-defeating behavior can't hurt in the long run.

However, this thing is out of control right now.

Politicians are actually vying for control of Earth's Future Climate.

Whoever wins, there will be casualties...all on Algore and Sir Richard in my book.

Neither one misses a Photo Op when it's all good.

Let's see how they respond when the caca is in the fan.

It's as simple as that!

Picture Algore seated in rapt attention at Sir Richard's feet while glorious tales of Media Wizardry are spun by the Virgin Boss.

Sounds like the opening lines of a really bizarre Fairy Tale...straight out of Make-Believe...don'tchathink?

Algore and Sir Richard successfully took Environmentalism from the Granola Factory to the Video Arcade.

Following in the great tradition of American Fads, from Hula-Hoops, through Mood Rings and Pet Rocks, all the way up to The Climate Crisis...these two guys used Toons and Tunes to introduce Hippie Gibberish and Tree Huggin' fretfullness into the Pop Culture mix.

That's OK...we really do make one hell of a mess with little regard for those who come after us.

It comes from American Expansionist Bravado...we all know the feeling.

Now...this feeling has been played with, using the full power of the media, to generate a sense of guilt...compliments of the Earth Juggling Yahoos you see pictured above.

That said, it's now part of us...inextricably...for better, or worse.

The downside is...Adaptation via Popular Culture is where this all leads.

As soon as long range efforts to manage Earth's Climate...( as our newly aware, recently indoctrinated selfs demand from our leaders )...begin in earnest...all based upon initiatives begun by former Mall Slackers turned Environmentalists...we gotta live with the consequences...while Algore and Sir Richard reap huge profits...and reside in clear air.

Take these thoughts along as you proceed.

Why do those who would lead us into The Future think guilt trips are the best motivation?

I heard Sir Richard tell a Weather Channel reporter he got involved out of guilt.

His formative years were the Hey Days of guilt trips.

I am a Skeptic and Global Warming Denier. 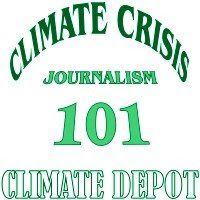 Climate Depot has brought it to my attention that there are those who would do me bodily harm for taking this stance and offering my opinion.

I challenge Algore, Sir Richard Branson, and any of the bandwagon-jumping, coattail- riding, envirocapitalists who have fallen in line over the past couple of years to change my mind.

Let's have a mock trial via Climate Depot...The Court of Public Opinion should rule on this topic.

Prove me wrong and you can burn my ol' carcass at the stake...live on Current TV.

I think you are all a bunch of pathetic, deer in the headlights looking, sixty year old guys...trying to spiff up your epitaphs and smear the overbearing guilt you feel onto Earth's Young, while still capitalizing on the same type of mass fear and ignorance which allowed Potentates of Yore to control the populace via public heart eating, sacrificing virgins, demanding tribute and the like.

There are obviously details left to be worked out, but I am ready whenever anybody else is.

The Gaia Program...founded 1982...dedicated to peaceful exploration of our Universe.

Don't forget...here is part of the Universe.

The Gaia Program is an Impoverished Philanthropy, operated and funded by Yours Truly, Rebel Hundredaire. 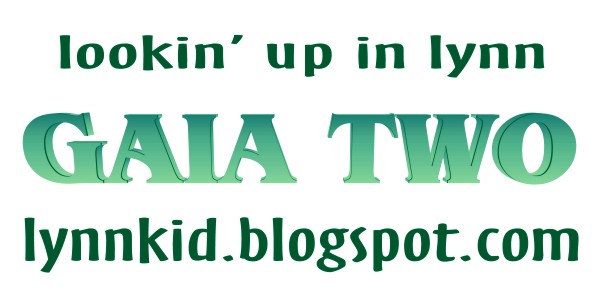 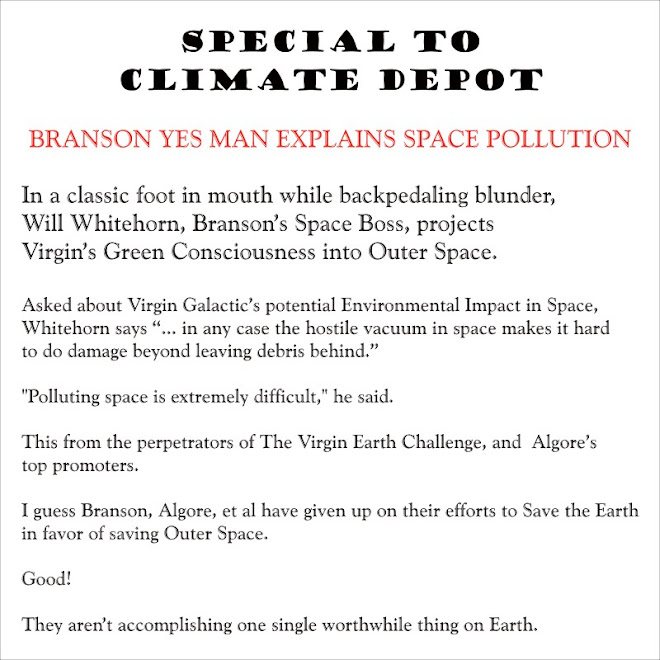 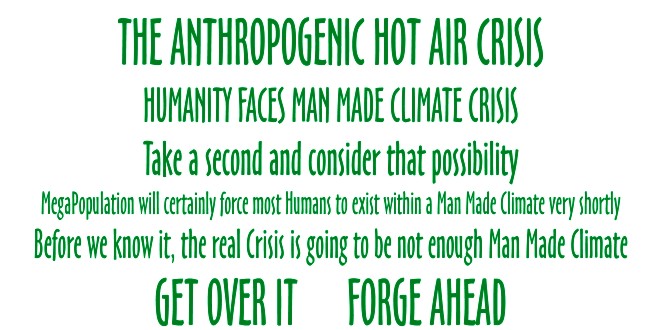